They say men are the stronger sex and are often seen as the power-lifting, sculpted-muscled brothers. Men are viewed as protectors and caretakers. But when it comes to health, facts say different stories.

Women live longer than men for various reasons and for the same reason they get a lower life insurance premium. Globally, nearly 1.3 million men are diagnosed with prostate cancer every year, resulting in an estimated 360,000 deaths, typically in men in their mid-to-late 60’s. Testicular cancer strikes many men in their prime, with around 70,000 new cases every year globally. About 510, 000 mean die from suicide every year. During the COVID-19 pandemic men experienced more severe symptoms and were at a greater risk of dying than women.

When compared to women, men are more likely to smoke and drink and make unhealthy or riskier choices. It is common for men to skip the doctor until they are faced with a serious health problem. It’s the whole “if it ain’t broke, don’t fix it” line of thinking for most of us.

Men are twice as likely to feel financial burden in relationships. They are likely to feel they must be emotionally strong and take practical charge in a crisis situation than their female counterparts.  Because we train soldiers and professional warriors and expect them to be emotionally intelligent to deal with their inner struggles. They are taught to be strong and quiet.

This model of masculinity may be why men are more likely to underreport symptoms of depression.It sounds like the easiest thing in the world, but for many men it can often be the hardest, especially when it comes to talking about their feelings.

And when they are struggling with depression, anxiety and other mental health conditions, they aren’t embracing healthy coping resources, but may turn to alcohol, smoking or sometimes even drugs as a way to numb the pain.

November is observed as the Men’s Health Awareness month. Let’s bring about awareness about the preventable health problems and encourage early detection and treatment of prostate cancer, testicular cancer and depression to support the gentlemen who wear their capes as friends, colleagues, cousins, brothers, sons, fathers & grand dads.

Movements such as “Movember” have served to improve the differences in recognition of health and self-care across genders. But “Movember” is not all about moustaches and selfies. It’s all about giving men a chance to bounce back and feel stronger than they were before. 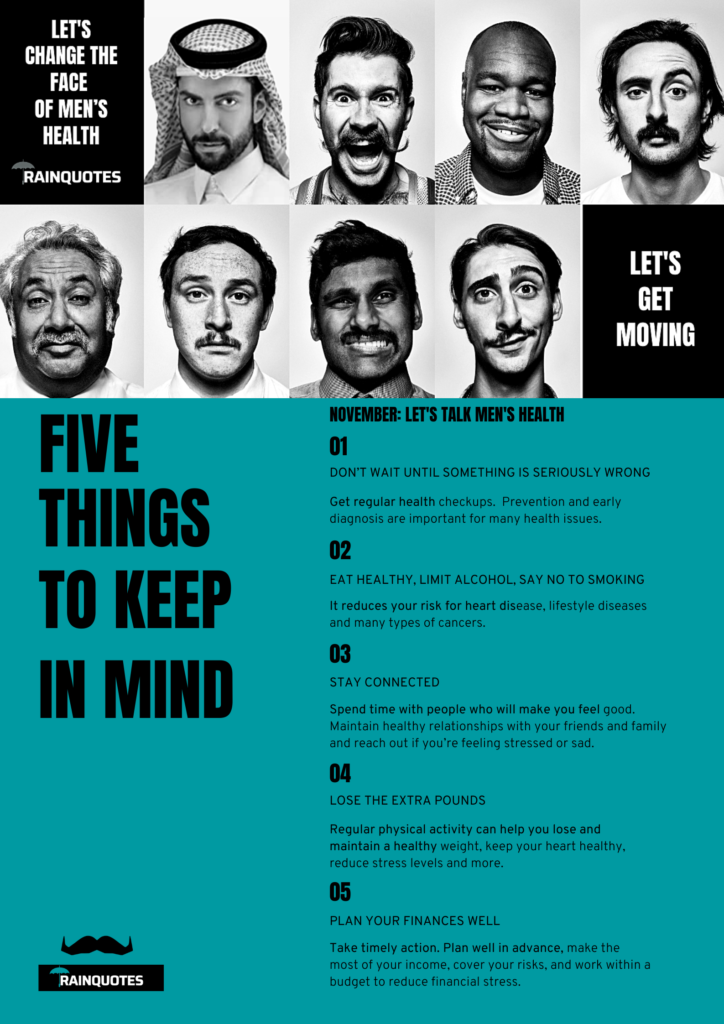